It Began at Iowa State College

The first Cooperative Wildlife Research Unit was established in 1932 at Iowa State College, now Iowa State University, in Ames, Iowa because an insistent political cartoonist wanted to see more science in the management of natural resources. 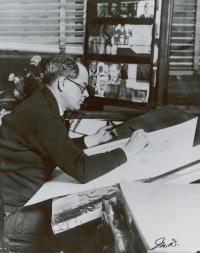 J. N. "Ding" Darling was the cartoonist and he was an able spokesman for sanity in the preservation of nature's limited bounty. "Ding" - the name with which he signed his nationally syndicated cartoons - was a household name in the 1930's. He had already won a Pulitzer Prize for his editorial cartooning. (He won a rare second Pulitzer in 1942, seven years prior to his retirement.)

Darling was born in 1876 - the nation's centennial year. He had grown up in Sioux City, Iowa. As a boy, he had ridden through prairie grass so tall it brushed his knees as he sat astride a racing Indian pony. He had seen the seemingly endless supply of wildlife. "If I could put together all the virgin landscapes which I knew in my youth and show what has happened to them in one generation, it would be the best object lesson in conservation that could be printed," Darling later wrote.

Ding Darling led the fight to divorce Iowa's conservation activities from political interference and had been named the first chairman of the resulting Iowa Fish and Game Commission (now the Iowa Department of Natural Resources).

One of the first projects of the Iowa Fish and Game Commission was also one of the most far-sighted. Under the leadership of the venerable Professor Aldo Leopold of the University of Wisconsin, some of the most knowledgeable persons in the then infant field of natural resource management were drawn together to create a comprehensive 25-year conservation plan for the state.

It became almost immediately clear to Darling that there simply were not enough scientifically-trained specialists to do professional wildlife management, research, and administration.

He proceeded to negotiate a tripartite agreement among Iowa State College (now Iowa State University), the Iowa Fish and Game Commission - and himself, to help fill this void. Eager to demonstrate his conviction, Darling pledged $9,000 of his own money - $3,000 for each of the first three years - to the enterprise. In depression-weary 1932, he could have purchased a 100-acre Iowa farm for about the same price.

By July 1, 1932, Paul L. Errington, who had earned his new Ph.D. under Aldo Leopold at the University of Wisconsin, had joined the Iowa State College staff as leader and organizer of the nation's first Cooperative Wildlife Research Unit. 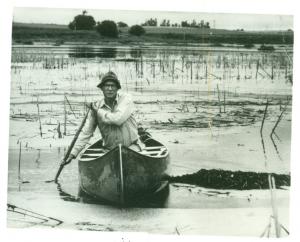 The beginnings were unpretentious. Errington's "empire," a cramped room in the basement of the Insectary Building, housed Errington, his graduate students, some equipment, a reference collection and piles of rubber boots. But this was the beginning of an innovative and especially effective system for developing information to be used to scientifically manage the nation's fish and wildlife.

Darling, meanwhile, was being noticed by Secretary of Agriculture Henry A. Wallace. Wallace wanted Darling to head the U.S. Bureau of Biological Survey -- forerunner of the Fish and Wildlife Service and then a part of the Department of Agriculture.

Darling accepted the position because it offered him a once-in-a-lifetime opportunity to influence the nation's conservation attitudes and policies. Once Darling became the head of the Biological Survey, he wasted no time in lobbying for the legislation and private support necessary to make his Cooperative Research Unit a national idea.

In 1935, he called a meeting of industrial leaders at the Waldorf Astoria Hotel in New York City. He had already lined up nine land-grant colleges and their respective state conservation departments to ante up the two-thirds of the $243,000 cost of running nine Cooperative Wildlife Units for three years. He needed another $81,000 and it seemed the money was not likely to come from federal funding.

By December, 1935, eight units had started, and the ninth was set up shortly thereafter. An early progress report in 1935 stated:

"In starting the program, all states were made aware of the opportunity . . . there were more states desiring the work than could be handled with this year's resources, and it was possible to establish only nine stations. Selection was made with the objective of operating on the basis of natural ecological units, so that work done at each station would have regional application."

The nine original national Cooperative Wildlife Research Units were located in Alabama, Connecticut, Iowa, Maine, Ohio, Oregon, Texas, Utah, and Virginia. The Bureau of Biological Survey's annual report for June 30, 1936 indicated that all the state units were under way with 9 project leaders, 19 graduate students, 7 full-time research assistants, and 24 other temporary or part-time employees. It also reported that literature had been published, and "considerable educational work done".

In 1960, two years before Darling died at the age of 85, Congress gave statutory recognition to the Cooperative Research Unit program by enactment of Public Law 86-686. The act reads:

"To facilitate cooperation between the Federal Government, colleges and universities, the States, and private organizations for cooperative unit programs of research and education relating to fish and wildlife, and for other purposes. Be it enacted by the Senate and House of Representatives of the United States of America in Congress assembled, That, for the purpose of developing adequate, coordinated, cooperative research and training programs for fish and wildlife resources, the Secretary of the Interior is authorized to continue to enter into cooperative agreements with colleges and universities, with game and fish departments of the several States, and with nonprofit organizations relating to cooperative research units: Provided, That Federal participation in the conduct of such cooperative unit programs shall be limited to the assignment of the Department of the Interior technical personnel by the Secretary to serve at the respective units, to supply for the use of the particular unit's operations such equipment as may be available to the Secretary for such purposes, and the payment of incidental expenses of Federal personnel and employees of cooperating agencies assigned to the units. There is authorized to be appropriated such sums as may be necessary to carry out the purposes of this Act."

The success of the wildlife units led, the same year, to the creation of cooperative fishery units, administered by the former Division of Fishery Services until 1973, when they were combined with the wildlife units under a single Research Division in the U.S. Fish and Wildlife Service.

In 1993, the Research Division of the Fish and Wildlife Service, the Research Division of the National Park Service, and several other research entities within the U.S. Department of the Interior were merged to form a new entity - the National Biological Service. The mission of the National Biological Service was to work with others to provide the scientific understanding and technologies needed to support the sound management and conservation of our Nation's biological resources. The primary role of NBS was to meet the biological research needs of other organizations within the Department of the Interior, other Federal agencies, States, local entities, Tribes, and private and nonprofit users.

In October of 1996, the Cooperative Units again moved within the federal government. They, along with the rest of the National Biological Service, became the Biological Resources Discipline of the U.S. Geological Survey. Today, 7 of the original 9 units are part of a network of 43 fish and wildlife units in 40 states.

The Cooperative Unit concept was, and continues to be, a good idea whose value has been repeatedly demonstrated with more than a half-century of quality research, education, and extension.